Playing a match to remember ‘the heartbeat of grassroots football’

Our thanks to Kyle Tagg at the Mid-Devon Advertiser for the article. 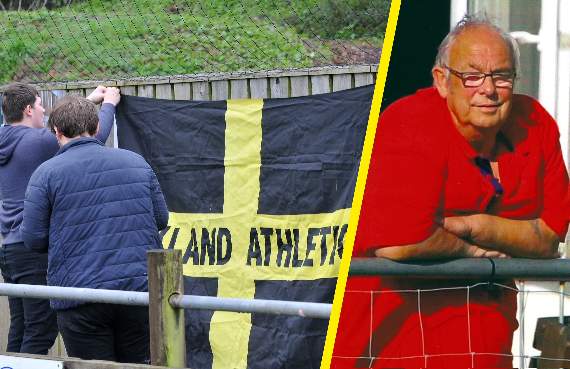 A TEAM of former Buckland Athletic players will be rolling back the years later this month in memory of the club’s former chairman.

Roy Holmes, pictured, earned the title of ‘Mr Buckland’ thanks to his years of work behind the scenes at the Western League club. Holmes died in February last year aged 73.

And on Sunday, August 29, the club is staging a memorial match in his memory, where Adam Castle’s Buckland Athletic All Stars will take on a Devon & Cornwall select XI.

Captaining the All Stars on the day will be Ben Williamson, a Buckland veteran of some 186 appearances.

Having moved down from the Midlands aged 11, Williamson began his youth career with the Bucks before embarking on a footballing journey around the South West.

He returned to the club aged 29 as it was moving into Homers Heath – where he stayed until a broken leg put an end to his career aged 35.

Ten years on from that, the defender says he cannot wait to get back on the pitch in memory of an ‘extremely welcoming’ man.

‘Roy was a completely larger than life character,’ said Williamson. ‘There was absolutely no mistaking when he was in the room.

‘He was extremely welcoming of everyone and often the first and last character you’d see at the club on any given day.

‘The first time we won the league I was so pleased for him and everyone else behind the scenes. Speaking to him at the time, I could tell it gave him huge satisfaction.

‘At presentation evenings he would always turn into a bit of a stand-up comic which was a great laugh. He really was the heartbeat of grassroots football.’

When Williamson received the phone call from director of football Adam Castle asking him to play for and skipper the side, there was no hesitation whatsoever.

‘When Adam asked me I said absolutely yes no question – and then I remembered I haven’t played football for 10 years!

‘I feel like I’m 19 again to be honest – I’m really looking forward to it. If it wasn’t for Roy, a lot of us who are playing may never have met each other.’

Another ex-player set to feature in the match is Tom Sercombe, who racked up 176 appearances and 99 goals having first joined the Bucks in the late 1990s.

‘Roy’s son Billy was the one who first talked me into training with Buckland when I was 18,’ said Sercombe, who is now 42. ‘I had three stints with the club overall.

‘Straight away the club was welcoming and Roy was the main man. He was a great laugh and always made me feel like I was one of his sons.

‘I used to get booked and sent off a fair bit, so Roy and I would sit together and write up letters to try to get them rescinded. A lot of the time they worked!

‘His voice used to boom around Homers Lane. He was one of those local football characters you don’t really get anymore.

‘One of the last times I saw him would’ve been when I was on the bench for Newton Spurs. I think I was about 40, but he still called me “Young Tommy Sercombe”.

‘When Adam asked me to be involved I had no doubt at all – but told him I’d better put these chocolate biscuits down!’

Midfielder Marc Revell took to the pitch a whopping 338 times for the Bucks before going on to manage the club’s reserve side.

Without Roy, he says, the club would be in nowhere near as stable a position as it finds itself in today.

‘I loved Roy right from the day I signed back in about 1999,’ said Revell. ‘Without a doubt he’s the reason the club is as solid as it is.

‘And even though he’s not around anymore he’s implemented such a good ethos of “if it ain’t broke, don’t fix it”, which still lives on.

‘He was a stickler but for all the right reasons, and when I’m making decisions I still think about what Roy would’ve said about them.

‘It’s going to be a great day which I’m sure Roy would’ve enjoyed – stood in his same spot leaning over the railings.’

The honour of managing the Devon & Cornwall Select XI has been given to former Buckland manager Steve Massey.

The ex-pro is now in charge at fellow Western League outfit Helston, and says that occupying the away dugout on the day will be a highlight of his career.

‘The feeling I got when Adam Castle rang me was one of pride,’ he said. ‘I was very proud to be asked and I’m really looking forward to it.

‘The word “legend” is thrown around easily these days, but Roy was just that. He is probably the president of the legends’ club.

‘When I first shadowed the outgoing management before I took over, I could tell that the club had everything it needed to go even higher. It’s a fantastic set-up, and Roy was the real driving force behind the whole project.

‘I thought Buckland and I would be a marriage made in heaven and I’m sad that it didn’t work out, but I’ve never lost my respect for the club and Roy and I always kept in touch. I was even invited to join them when they went on the FA Vase run a few years ago.

‘Roy was also a fabulous family man. It’s always been my ethos when it comes to non-league football that family comes first, and he ran the club like a family.’

Massey’s squad on the day is set to feature a mixture of Cornish youngsters from Helston’s under-21s along with players who have represented Buckland in the past.

He added: ‘We’ll have a squad and a starting team which will honour Roy’s name, even if players will probably still be coming in 48 hours before!

‘It’s going to be a fabulous day, and being asked to be a part of it is definitely one of my proudest moments in football.’

Kick-off at Homers Heath on Sunday, August 29 is set for 1pm with the bar and gates opening at midday. Entry will be free along with a hog roast, and there will be a collection in aid of Leukaemia Research.